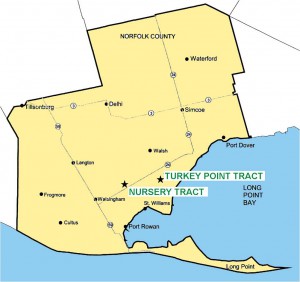 rve includes 1035 hectares of Crown land in Norfolk County, Ontario.  The Reserve is made up of two separate sites: the Nursery Tract and the Turkey Point Tract.  These two tracts are also designated as the E.C. Zavitz Forest and the J. H. White Forest, respectively, in recognition of the two men who played key roles in the acquisition and reforestation of these lands in the last century. Click HERE for maps of the properties.

The St. Williams Conservation Reserve is nationally renowned for its rare and sensitive ecosystems. It is an important site for the conservation of biological diversity and natural heritage, especially that of the oak savanna and prairie communities. A primary objective for the management of the Reserve is to restore and enhance the native ecological communities at this site, which will benefit the many rare and threatened species that live here.

MORE about the vision for the Conservation Reserve

A long history of ecosystem restoration

Over 200 years ago, this area was covered in a mosaic of oak savanna, sand barrens, Carolinian forests, and wetlands. During the 19th century, many of these lands were deforested or cleared for agriculture by the European settlers, and erosion further degraded the land. In the early 20th century, efforts restore these wastelands began: Ontario’s first forest station was established here in 1908, and pine plantations helped stabilize the blow sands. As a result of these early reforestation efforts, much of the Conservation Reserve is now blanketed by pine plantations and mixed cultural forests, and remnants of the natural ecosystems have survived.

Restoration of these lands in the 21st century will focus on expanding and enhancing the natural ecosystems and biodiversity. Some examples of the historic pine plantations will be maintained to represent and honour the success of the foresters and conservationists of the last century who were able to convert barren wastelands into productive forests.

MORE about the history of the Conservation Reserve

The St. Williams Conservation Reserve is strategically located in the middle of the Carolinian eco-region in southwestern Ontario. The Carolinian region makes up less than 1% of Canada’s total land area but boasts a greater number of both flora and fauna species than any other ecoregion in Canada. It is also the most threatened ecological […]

Why Was The CR Established? Ontario established the St Williams Conservation Reserve so that: ‘…these tracts will be a flourishing example of extraordinary biological diversity representing their pre-European settlement natural legacy of ecological communities while protecting their unique cultural heritage and providing opportunities for compatible public land uses.’ — SWCR Management Plan 2007 – 2057 […]

New Wayfinding Signage at the CR

UPDATE – Conservation Reserves is open for all recreational activities as of May 22, 2020.

If you are interested in being a Community Council member please fill out an application.

A “species at risk” is any naturally-occurring plant or animal that is in danger of extinction or of disappearing from the province.

Learn more about species at risk.

Here is our RSS feed.